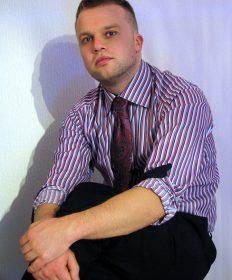 
In 2013 I became the youngest dean in the Republic of Belarus. My range of responsibilities mainly encompasses the cooperation with the University’s foreign students and partners. Moreover, the faculty is the main financial donor of the University. Within the framework of this international cooperation I have become the coordinator of the Association of the International Relations’ (Czech Republic) projects in Belarus in the sphere of the Eastern Partnership cooperation. Among the other six Eastern Partnership countries the implementation of the recent project in Belarus was the most successful one. In 2013 I entered the School of Young Managers in Public Administration (Belarus – Lithuania – Georgia – Sweden). During my study I was demonstrating high rating scores and became an expert of the Belarusian Institute for Public Administration Reform and Transformation (BIPART Think Tank). I am an active member of a Belarusian NGO “Liberal Club” and I am engaged in many academic and social projects implemented by some of the Belarusian NGOs – the Institute of Political Studies “The Political Sphere”, the experts’ community “Nashe Mnenie – Our Opinion”, the Liberal Club, the Belarusian Institute for Strategic Studies etc. Due to the political situation in Belarus I participated in some projects under the pseudonyms but the coordinators are ready to confirm my contribution. In August 2014 I was a co-organizer together with the Polish Institute for National Heritage of the Summer School “The Academy of Niesvirz” which was devoted to the issues of authenticity in restoration of the historic sites and monuments. I am proud that in spite of my non-Jewish origin I was approved by the Israeli cultural center in Minsk to present the Hebrew language at the II Minsk International Language Festival. In October 2014 I applied and was successfully admitted to the Doctorate (Dr.Hab.) programme in the Arabic studies.