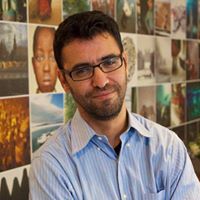 
Aziz Abu Sarah is an Executive Director at the Center for World Religions, Diplomacy, and Conflict Resolution. He won the Intercultural Innovation award from the UN Alliance of Civilizations and was also named a National Geographic Explorer in 2011. In 2009, he co-founded Middle East Justice and Development Initiative (MEJDI Tours) to use as a bridge between conflict resolution and business. He is a lecturer and has spoken in hundreds of churches, synagogues and mosques on the subjects of peace, reconciliation, and interfaith dialogue. He is also an expert on Middle East conflict dynamics, Islamic conflict resolution, the Israeli-Palestinian conflict, Afghanistan, and the Arab Spring. He has lectured and facilitated meetings for countless international organizations and universities, including Harvard, Georgetown, Princeton, Yale, the European Parliament, and the United Nations. Aziz is a columnist for Alquds Newspaper and is a regular contributor for 972mag.com, a new Israeli online English magazine. He has published articles in The New York Times, Haaretz, the Jerusalem Post, Alarabiya, the Daily Star and others. He regularly provides analysis for television news programs such as Al Jazeera, CNN and Fox. Aziz co-hosted a radio show in Jerusalem for three years with tens of thousands of listeners from around the world, including the US. He has been honored to receive the Goldberg Prize for Peace in the Middle East from the Institute of International Education, the Silver Rose Award from the European Parliament, the Eisenhower Medallion from People to People International, and the Eliav-Sartawi Award for Middle Eastern Journalism from Search for Common Ground. He was named one of the 500 Most Influential Muslims by the Royal Islamic Strategic Studies Centre for 2010, 2011, 2012, and 2013. United Nations Secretary-General Ban Ki-moon recognized Aziz Abu Sarah’s work during his speech at the 5th Global Forum of the UN Alliance of Civilizations in February 2013.