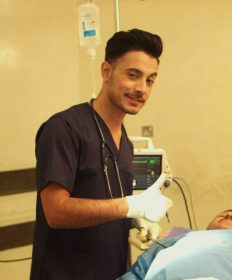 Ghaith Alghaffari is a young physician graduated from Al-Kindi Medical School in Baghdad. His family’s background is multicultural, and its diversity represents almost every part of Iraq. Joining medical school didn’t stop him from chasing his ambition and initial dream to become an effective young leader in his community. He started as a volunteer in many youth organizations, enrolled in various social and community activities. Afterwards, he continued this work on an international level: he started working on building a youth platform including 22 young leaders from the Arab league called “Network 22”, founded and implemented by the World Bank. He also served as the Echo-Generation TUNZA Ambassador of Iraq in 2014, working with Iraqi youth parliament in different workshops for capacity building and leadership skills training targeting the youth of Iraq. Ghaith worked with the Observatory Council in at the Ministry of Youth and led a group of potentially motivated young people to address the most striking youth issues in the country to deliver it to the decision makers. He is fluent in English, Arabic, French and Kurdish.