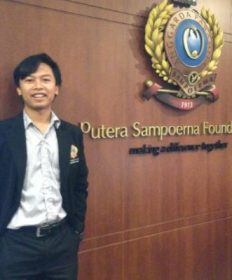 
Kakang Web a.k.a. I Wayan Alit Sudarsana, S.H. is the founder of Little Circle Foundation (LCF) and the CEO of Hanacaraka Language Center. LCF is a non-profit organization focused on improving the quality of education in Bali, Indonesia through knowledge sharing, people empowerment, and volunteering. He finished his law degree at Udayana University, Bali in 2015. He was also a Fulbright (Global Ugrad) scholar at Department of Political Science University of Utah, Salt Lake City, USA and a Putera Sampoerna Foundation Scholar at Faculty of Law, Udayana University, Denpasar, Bali, Indonesia. He is currently undertaking his Master of Law study in the faculty of law, Maastricht University, the Netherlands (StuNed scholarship). In 2014 he was awarded Twincle Fellowship to study at Chiba University, Japan. Recently he was awarded the prestigious Southeast Asia Global Undergraduate Leader (SEAGULL) scholarship by Singapore Management University. In 2015 he was selected as one of the 50 Global Youth Leaders to participate in Global Youth Advocacy Workshop on Global Citizenship Education (GCED) organized by, UNESCO, The UN Secretary General's Initiative on Education, Asia Pacific Center of Education for International Understanding, and Mahatma Gandhi Institute of Education for Peace and Sustainable Development in Busan, Republic of Korea. Later in 2015, he was selected to join the. UNAOC-EF Summer School. Acted as participant as well as speaker at the summer school. Selected out of 13,000 applicants around the world. Held in New York, USA. He is a multilingual speaker, he speaks Balinese, Indonesian, English, French and currently studying Spanish and Japanese. He also a volunteer at Jackson Elementary school in Salt Lake City, Utah, USA.