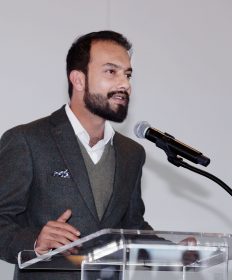 
Syed Ali Abbas Zaidi is an award-winning activist, researcher and social-development professional. He is the founder of Pakistan Youth Alliance, Khudi Pakistan and HIVE- all of which work to counter violent extremism using different means and intervention techniques. He has successfully led over 30 projects in 40 cities of Pakistan reaching out to millions of people since 2007. He has studied Social Innovation and Trans-media Story-telling from Sweden and USC Anneberg respectively. A documentary made on his work, "Pakistan: The New Radicals" by Al-Jazeera aired in 2012. He is also a part of the elite panel of CVE activists known as Extremely Together that were selected by the late Kofi Annan to advocate and work for more effective CVE campaigns and policies. He is the winner of Intercultural Innovation Award by UNAOC and BMW Group, Azm e Aalishan Award and several other acknowledgements.