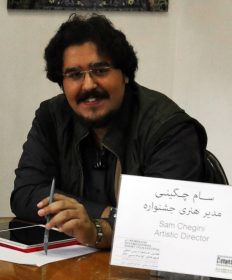 
Born in an artistic family in Tehran/Iran in 1992, Sam developed a strong passion for Fine Arts from an early age. Hardships of pursuing art and music in Iran and his quest for the up-to-date knowledge led him to reach out to the world beyond the borders of his country, communicating with artists from other nationalities and taking part in several international contests. In 2006, he decided to found his own home studio under the label of Sam Pictures Productions and started working as a freelance artist. In 2009, he connected to the Dutch singer/songwriter Linde Nijland through internet which led to the making of his first official animated music video for one of Linde's songs "Traveller". Traveller has been screened in various international film festivals around the globe and succeeded to win prestigious awards including the Royal Reel Awards from Canada International Film Festival in 2013. In early 2014, Sam collaborated as a puppeteer with "The City of Mice 2" project, the sequel to a very nostalgic puppetry feature film directed by legendary Iranian director, Marziyeh Boroumand. In 2015 Sam was a member of the “Online Pre-screening Committee” at the “Sprockets International Music Video Festival” (Georgia, Athens, USA). In 2016-2017 Sam joined the play “MANUS” as Video Artist, Mapping Artist and International Affairs for their international performances in Bangladesh (Chittagong and Dhaka), India (Kerala International Theatre Festival) and Fajr International Theatre festival (Tehran). In 2017, Sam held the 9th Wordless International Short Film Festival as Artistic Director. Same time screening in Qazvin, Iran with Sydney, Australia with 20 shorts from 19 countries. Sam’s latest video is made for renowned British actor/singer and BAFTA winner, Sir Lenny Henry which was produced by the legendary British producer, Chris Porter.