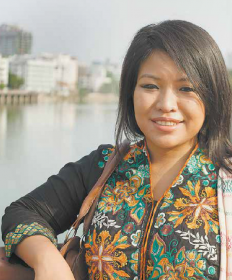 
Trimita Chakma is a women’s rights activist and currently works at Asia Pacific Forum on Women, Law and Development (APWLD). Trimita mentored a Feminist Participatory Action Research (FPAR) on sexual violence against indigenous women and girls of Chittagong Hill Tracts and their access to justice in 2012-2-13 with Kapaeeng Foundation, an indigenous people’s rights organisation in Bangladesh. She is one of the pioneers that brought VDAY’s annual benefit performance of the play ‘The Vagina Monologues’ to Bangladesh in 2010. She was one of the key coordinators of One Billion Rising Bangladesh from 2012-2014, which is part of VDAY’s global campaign to raise awareness about violence against women. Trimita completed her M.Sc. in IT Management from Carnegie Mellon University in 2008 on an Australia Awards Scholarship. In 2012 she received an Australian Alumni Excellence Award for Young Alumni and was nominated as an Asia 21 Young Leader by Asia Society. In 2013 she was selected as one of the 100 global participants to attend the UNAOC-EF summer school in New York as a representative from Bangladesh. She also supports the UWC education movement as an alumna and a member of the UWC National Committee in Bangladesh.