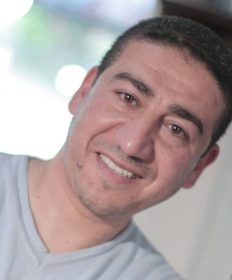 
Yousri Alghoul (Palestine) is an author, essayist and human rights activist. He published four short stories' books and wrote many articles about life in Gaza covering all major events since 2002. His works got a widely spread in Palestine and affected the situation there. Yousri is active in the field of literature, journalism, human rights, Political affairs and youth activism which enabled him to have a wide network of contacts both locally and internationally. Yousri is a member of a number of civil society organizations and regularly takes part in workshops related to human rights, international humanitarian law, and diplomacy. Moreover, Hw is the founding curator of Global Shaper Community- Gaza Hub, and Cordoba Cultural Meeting (The most well-known Cultural Initiative in Gaza Strip). Yousri holds a master's degree of Middle East studies from Al-azhar University in Gaza. So he took a part in many speaking tours and conferences in the USA, Azerbaijan, Malaysia, Spain, Germany, Belgium, France and Egypt about Palestinian affairs and youth activism in the Palestinian Territories, related not only to his coverage of literature but also in politics, interfaith and diversity and integration. He was a researcher of Euromid Observer for human rights and an editor of an intellectual and cultural magazine named “Madarat” from January 2010 until April 2012. His Arabic blog: www.yousrialghoul.com His English blog: www.yousrighoul.wordpress.com