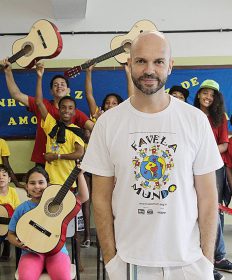 
Actor, theater teacher, social activist, make up artist and Favela Mundo´s CEO and Founder. As an actor he has performed in over 15 theater plays in Brazil and Argentina. Marcelo started his artistic career as an actor and always have guided his work for the importance of art for the formation of the citizen. After 10 years as an actor he has created the Favela Mundo to develop activities for poor children and young people in Rio de Janeiro. The organization has helped more than 4.800 children and young adults from 132 neighborhoods in the city with cultural activities. Marcelo represented Brazil as a guest in pedagogical and cultural events in United States/ UN (UNAOC-EF Summer School, World Cities Day and Millenium Campus Conference, Millenium Campus and Opportunities Fair) in 2013,2014 and 2015 and Mexico (I Congreso Internacional de Pedagogia de Aragón/2011), Cuba (Congreso Internacional de Pedagogia-Havana, 13ª and 16ª/18ª Romerias de Mayo- Holgín), in 2011 and 2014 and Morocco (NAIMUN), in 2016. In addition to classes for children, Favela Mundo develops professional training for their parents, young people and adults from violent and poor areas, currently there are more than 900 who have achieved their qualification thanks to our work.