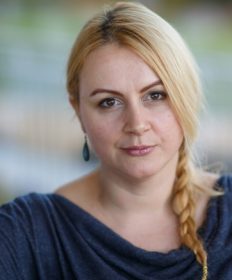 
Velma is a researcher, journalist, peacebuilding expert and human rights defender from Sarajevo, Bosnia and Herzegovina. In addition to her position as Founder and President of the Post-Conflict Research Center, she is also the Founder and Editor-in-Chief of Balkan Diskurs, and Project Manager of the War Art Reporting and Memory (WARM) Foundation, Sarajevo Branch. As a researcher and producer she has worked on numerous publications and films about the 1992-1995 Bosnian war, including Uspomene 677, In the Land of Blood and Honey by Angelina Jolie, and I Came to Testify and War Redefined from the PBS series Women, War & Peace. Velma has held fellowships at both Columbia University in New York and the Robert Bosch Foundation. As part of her fellowship with the Robert Bosch Foundation, she attended the Alliance for Historical Dialogue and Accountability Fellowship Program. Velma is the only Bosnian to be a part of the VV100 – a Vital Voices group of 100 most engaged and visionary members of the Vital Voices Global Leadership Network.