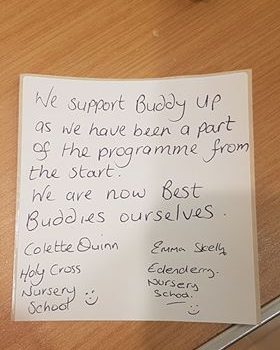 The announcement in November 2017 that Buddy Up! had won 3rd place in the prestigious Intercultural Innovation Award sponsored by the United Nations Alliance of Civilisations and BMW Group was an encouragement that had ripple affect both abroad and at home. This honour was repeated in the April 2018 when Buddy Up! was nominated and won the local Belfast Telegraph’s ‘Spirit of Education’ award.  Recognition at both an international and local level for the ongoing partnership between these two inspiring schools was especially important as 2018 was the 20th Anniversary of the founding of the Buddy Up! programme between the two schools,

Receiving this award has been a great stimulus for all our participant schools and parents and this past year was action-packed for Buddy Up!  Our work with Edenderry and Holy Cross Nursery Schools saw a flurry of activity with weekly parent workshops; ministerial visits; Buddy Up! playdates; filming for a new E-Media Resource, an Intergenerational Community Relations Residential and much more!

As we finished the year we helped mark this achievement with a 20th Anniversary Celebration held at Girdwood Community Hub. As Buddy Up! was established in the wake of the Good Friday Agreement it was especially important to take the opportunity to reflect on this milestone in the life of the two schools. As such the celebration was open to all families who had been involved over the years in Buddy Up!

A handwritten message left at the event by two of the mums (see photo) tells one special success story. Not only have their children gotten to know each other, over the years these two mums have also become fast friends because of their involvement in Buddy Up! To quote their message: “We are now Best Buddies ourselves” Result? Truly intergenerational peacebuilding!